A business deal management system is an important part of the strategy to ensure the growth and profit of any revenue-generating company.

While the ultimate goal of a company is to close a deal, however an efficient deal management process will eliminate any kind of human errors. This is what a business deal system can ensure.

Moreover, it will provide your team with the required ammunition to convince any client and win the deal for your company. Also, you and your team will have all the information and tools to make informed and versatile decisions.

So, you can understand how important a deal management system is for your company. That is exactly why we are going to talk about the exclusive WP ERP CRM Deals extension, the system that will help you to manage your business deals in a proper and organized way.

All three modules have some rich extensions that will lower the difficulty of maintaining any company management needs. However, we are not going to talk about all the extensions today.

Rather we are going to focus on the Deals extension of the WP ERP’s CRM module.

The Deals extension is the perfect business deal management system as it manages and guides the CRM agents on a fast and organized pipeline based sales process.

Most importantly, the extension will help you manage all the information while dealing with multiple clients. And, it will certainly give you an upper hand while negotiating the terms for the deal.

However, it’s better we show you the features of this extension instead of just claiming how good it is! That way you will be able to come to a decision yourselves.

All The Deals Under One Dashboard

The Deals extension of WP ERP CRM lets you view all the deals under one dashboard.

Having all the information on business deals under one roof is helpful in every way. Because you are not making just one deal at a time. There may be several deals happening every month.

Therefore you need to have the right idea which deal is happening when. With the CRM deal management system, you can view the deals that are in place from the present month or the last month.

So, if a new person starts headlining the business deals section, from day one he/she will have all the information regarding the dealings of the past and the present under one dashboard.

There is a significance to it. As the saying goes,

You can learn a lot from your losses than your wins.

Deals also work that way. By keeping the lost ones in a separate section, you can easily check out every lost deal and take lessons from it. You can know the details of every deal which we will discuss shortly.

But, by taking lessons from those lost deals you will know what went wrong and you can easily avoid those mistakes in the future.

Status of Every Deal

Well, it goes without saying that you need to check the status of every deal to know where they stand.

You can easily do that with the Deals extension of WP ERP CRM. Every deal is clickable. So, when you click upon a deal, a new tab will open and you can see all the details regarding that deal.

You can view the activities, which stage the deal is in the pipeline.

So, even when a new employee takes over, he/can immediately catch up with the proceedings easily.

Drag & Drop the Deals From One Sales Stage to Another

Well, we introduced WP ERP CRM Deals Extension by saying that it will guide the CRM agents with a fast and organized pipeline based sales process.

So what is a pipeline? It is actually a process. After opening a deal and before closing it, there is a whole process a business deal must go through. That process is divided into stages. There can be 3-7 stages depending on the company and deal.

So, all the stages together are called the pipeline. It is sort of like a Kanban Board of Deals. With the extension, however, you can drag n drop the deals through one sales stage to another.

Suppose, you have opened a deal with a client. So the deal is now in the Proposal Made stage in the pipeline. You have conducted a meeting and you drag the deal to the Lead In stage.

Then you made the contact and set your pricing. Now the deal is in the Contact Made stage. Lastly, you have shown the Demo of your product, you are in the Demo Scheduled section.

All these stage movements are being done by its drag n drop feature. So easy right? Later on, if anyone sees the pipeline, they will immediately understand where the deal stands on the pipeline stage.

Well, we just talked about pipeline and it’s stages. Also, we have given an example of a scenario. But the stages we described, you can change to your liking.

Suppose you want the first sales stage to be ” Meeting with the customer“. You can go to the Settings option, choose the CRM option. Then you need to select Deals. You will see the stages and if you click on any stage, you can change the stage name.

Quite simple isn’t it?

Create the Activity Types You Want

There are many things you need to do to convince your client to give you the deal. That includes having several meetings, conference calls, sending emails, or having business lunch etc.

These are called activities.

However, if you don’t set a schedule, then you can forget some important activities. In this extension, there are already six default activity type,

However, you can delete any of these activities or create a new one anytime you want.

Add Reasons For Your Lost Deals

Remember we said you have separate tabs for the deals you lost and won? Well, for the lost deals, there is another feature. You can add reasons, why the deal didn’t go through or failed.

This will help you analyze what you did wrong and also this can work as a great example for the other team members.

Get Me the CRM Deals extension

How an Effective Deal Management System Can Improve Sales?

An effective deal & customer management system will not only help you close deals but also help you secure additional client relationships, maximize company profits by interpreting data for margins, profits, and revenue.

That’s exactly what you can achieve with the WP ERP CRM Deals extension. It has all the qualities that will help you improve your sales significantly.

Moreover, there are other advantages of this amazing CRM solution that will help you improve sales like,

1. You Are Always in the Know

It is not always one person that is in charge of overseeing the whole process of a business deal. There are many other people involved. So, it can become very difficult and sometimes monotonous to manually check the progress of the deal.

However, it is important that your sales representatives and obviously you know and receive updates as they occur in order to know what the next step is.

With the Deals extension of WP ERP CRM, you can easily get updates of every deal happening in your company and take necessary steps for the future.

It is quite normal for a big or medium-sized company to have multiple deals at a time. However, it is hard to give the same attention to every deal. Especially if you are doing this manually.

You might end up mixing the details of two separate deals resulting in losing both of them.

But, the CRM Deals extension will help you maintain multiple deals, giving you the opportunity to give the same attention to every deal you are working on.

Closing a deal requires a lot of effort. You need to convince your client so that they trust you with their investment. For that, you need to give them a lot of facts and data regarding the deal.

Well, if you try the old way. then the chances of you failing are higher. However, with the CRM Deal management system, you can easily gather data and save them for every individual deal.

That way you can find out what type of work or customer base your team is targeting, what their long-term threats to those goals are, and what their specific points are.

In this ever-changing era, there are very few people that stay at the same company for a long time. Although it is not bad to change ships, however business owners face some issue when that happens.

Because they have to give the new employee some time to learn and adapt. Especially regarding business deals. They have to spend some extra time to get them to speed up with every detail. And of course, there is not only one deal is there?

Not to worry, with every data being stored, pipeline set, task scheduled, the CRM Deals extension will help any new employee get familiar with every deal in a short time. He/she will easily understand what is going on in the deal and what the next step will be.

The longer it takes with a deal, the more things could go wrong. Also, it will result in fewer closed deals. Therefore, you can’t take new deals otherwise it will pile up more pressure.

The WP ERP CRM Deal management system allows you to speed up the sales process while still maintaining a quality relationship with a client providing a solution-based engagement.

Deal management is the key to refine your organization’s sales process. And with a powerful deal management system like WP ERP CRM Deals extension, you can easily improve your sales rapidly.

You can easily visualize the whole process, decide on what the next step should be, and then successfully close the deal.

Check Out All The CRM Extensions

Along with other exclusive extensions of the WP ERP CRM module, you can take your company’s overall business management process to a whole new level.

Shad is a tech and WordPress enthusiast. Passionate about Writing & Digital Marketing. Besides being a computer geek, he also loves football.

Don’t miss any updates of our new templates and extensions and all the astonishing offers we bring for you.

This site uses Akismet to reduce spam. Learn how your comment data is processed. 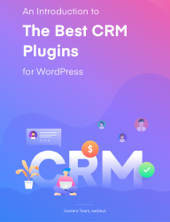